How does TFT LCD Display Work

How does TFT Display Work?

What is a TFT LCD?

A TFT LCD ,  or a thin film transistor liquid crystal display, is one of the fastest growing forms of display technology today. The thin film transistor (TFT) is a type of semiconductor device used in display technology to enhance efficiency, compactness, and cost of the product. In conjunction with its semiconductor properties, the TFT LCD is an active matrix display, controlling pixels individually and actively rather than passively, furthering the benefits of this semiconductor device.

Since paired with flat panel technology, notably liquid crystal displays (LCD), TFT displays have grown extensively in popularity for display screens and LCD monitors like computer monitors and smartphones. With this development, the cathode-ray tube, otherwise known as a CRT, began to fall into the past as the lighter, less bulky LCD took over in the field of displays. Modern-day high-resolution and -quality displays primarily use TFT technology within the LCDs.

The TFT LCD is built with three key layers. Two sandwiching layers consist of glass substrates, though one includes TFTs while the other has an RGB, or red green blue, color filter. The layer between the glass layers is a liquid crystal layer. 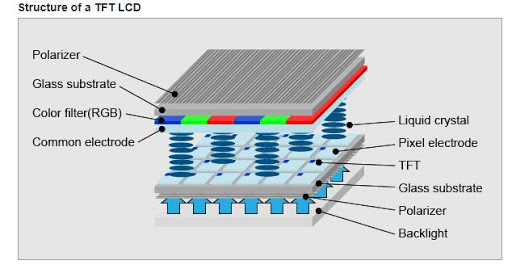 Fig. 1: A visual diagram of the different layers and components used in a TFT LCD display.

The TFT glass substrate layer is the deepest or back-most layer of a device’s circuit board. It is made of amorphous silicon, a type of silicon with a non-crystalline structure. This silicon is then deposited on the actual glass substrate. The TFTs in this layer are paired individually to each sub-pixel (refer to Architecture of a TFT Pixel below) from the other substrate layer of the device and control the amount of voltage applied to their respective sub-pixels. This layer also has pixel electrodes between the substrate and the liquid crystal layer. Electrodes are conductors that channel electricity into or out of something, in this case, pixels.

On the surface level is the other glass substrate. Just beneath this glass substrate is where the actual pixels and sub-pixels reside, forming the RGB color filter. In order to counteract the electrodes of the previously mentioned layer, this surface layer has counter (or common) electrodes on the side closer to the liquid crystals that close off the circuit that travels between the two layers. In both these substrate layers, the electrodes are most frequently made of indium tin oxide (ITO) because they allow for transparency and have good conductive properties.

The outer sides of the glass substrates (closest to the surface or closest to the back) have filter layers called polarizers. These filters allow only certain beams of light to pass through if they are polarized in a specific manner, meaning that the geometric waves of the light are appropriate for the filter. If not polarized correctly, the light does not pass through the polarizer which creates an opaque LCD screen.

Between the two substrate layers lie liquid crystals. Together, the liquid crystal molecules may behave as a liquid in terms of movement, but it holds its structure as a crystal. There are a variety of chemical formulas available for use in this layer. Typically, liquid crystals are aligned to position the molecules in a certain way to induce specific behaviors of passing light through the polarization of the light waves. To do this, either a magnetic or electric field must be used; however, with displays, for a magnetic field to be usable, it will be too strong for the display itself, and thus electric fields, using very low power and requiring no current, are used.

Before applying an electric field to the crystals between the electrodes, the alignment of the crystals is in a 90 degree twisted pattern, allowing a properly crystal-polarized light to pass through the surface polarizer in a display’s “normal white” mode. This state is caused by electrodes that are purposely coated in a material that orients the structure with this specific twist.

However, when the electric field is applied, the twist is broken as the crystals straighten out, otherwise known as re-aligning. The passing light can still pass through the back polarizer, but because the crystal layer does not polarize the lights to pass through the surface polarizer, light is not transmitted to the surface, thus an opaque display. If the voltage is lessened, only some crystals re-align, allowing for a partial amount of light to pass and creating different shades of grey (levels of light). This effect is called the twisted nematic effect. 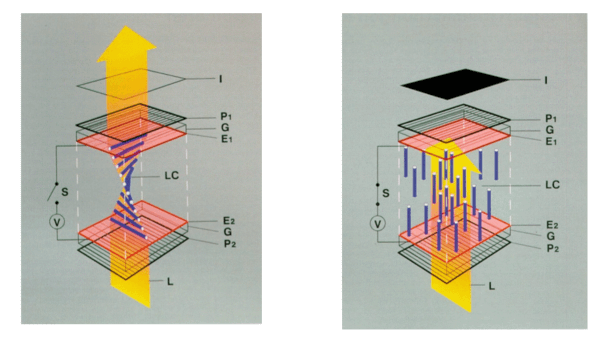 Fig. 2: On the left is the twisted liquid crystal layer in which polarized light passes freely; on the right is after the electric field is charged into the layer, completely re-aligning the molecule orientations so that light is not polarized and cannot pass through the surface polarizer.

The twisted nematic effect is one of the cheapest options for LCD technology, and it also allows for fast pixel response time. There are still some limits, though; color reproduction quality may not be great, and viewing angles, or the direction at which the screen is looked at, are more limited.

A solution to these limits was given through in-plane switching (IPS) of the liquid crystals. Rather than aligning the crystals perpendicularly to the electrodes, IPS aligns them in a parallel fashion. Light is then more streamlined within the matrix. There were initial problems like slow response time, but recently, these problems have been mostly resolved, making the benefits of better viewing angles and color reproduction greater than the faults. It is, however, a more costly technology than the twisted nematic devices. 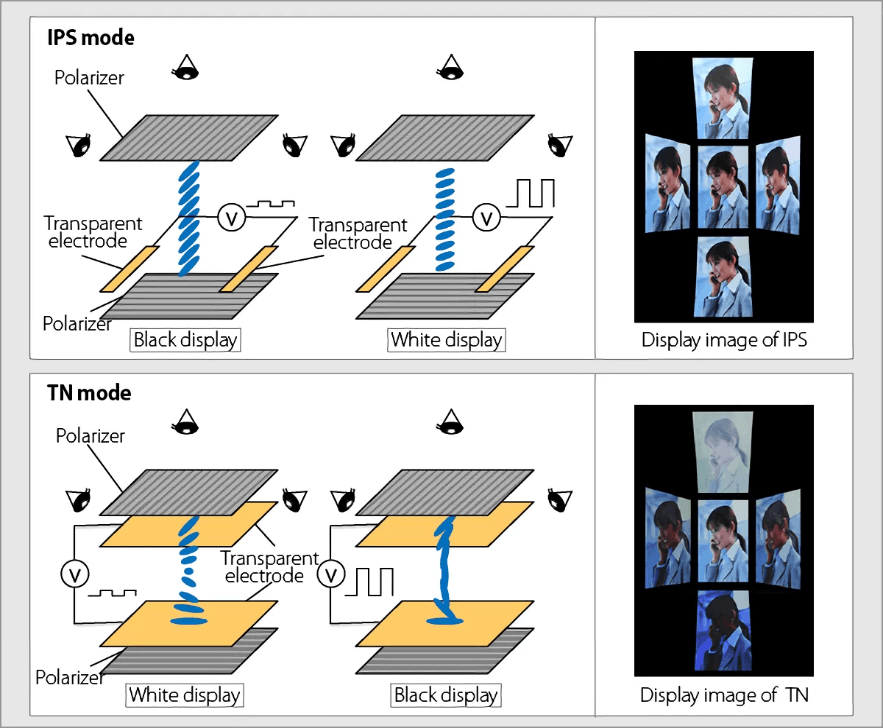 Fig. 3:The top row characterizes the nature of alignment in using IPS as well as the quality of viewing angles. The bottom row displays how the twisted nematic is used to align the crystals and how viewing angles are affected by it.

The light that passes through the device is sourced from the backlight which can shine light from the back or the side of the display. Because the LCD does not produce its own light, it needs to use the backlight in the LCD module. This light source most commonly comes in the form of light-emitting diodes, better known as LEDs. Recently, organic LEDs (OLED) have come into use as well. Typically white, this light, if polarized correctly, will pass through the RGB color filter of the surface substrate layer, displaying the color signaled for by the TFT device.

If you refer back to the first paragraph under “Evolution of TFTs” in the last article, “The History of Thin Film Transistor Displays,” there will be a basic explanation of the Field Effect Transistor (FET). The TFT is a form of FET, and so it also follows the driving principle of FETs as well. Essentially, if a voltage is applied to the gate of a TFT, the signal current can be controlled or altered. This current, called driving voltage, on the TFT-based LCD panel then flows from the source to drain and casts a signal to its sub-pixel, allowing light to pass through.

Architecture of a TFT Pixel

Within an LCD, each pixel can be characterized by its three sub-pixels. These three sub-pixels create the RGB colorization of that overall pixel. These sub-pixels act as capacitors, or electrical storage units within a device, each with their own independent structural and functional layers as described earlier. With the three sub-pixels per pixel, colors of almost any kind can be mixed from the light passing through the filters and polarizer at different brightness based on the liquid crystal alignment.