TN or IPS Monitor? What is the Difference?

When searching for a liquid crystal display (LCD), consideration of the device’s display technology is essential. Screen technology companies such as Apple and Samsung search for the best possible display panels and panel technology in order to offer their customers the best image quality. In competitive gaming, gaming monitors must be able to provide great image quality but also fast refresh rates so that gamers can play at a fast pace. 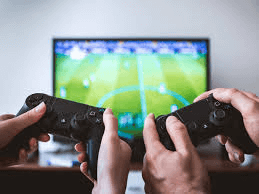 Most of the desirable LCD panel features such as wider viewing angles and fast refresh rates, can be rooted in the nature of the liquid crystals.

Before diving into how exactly liquid crystals affect display features, it is necessary to understand their general role in an LCD monitor. LCD technology is not capable of illuminating itself, so it requires a backlight. The liquid crystals are responsible for transmitting the light from backlight to the computer monitor surface in a manner determined by the signals received. They do so by essentially moving the light differently through the layer’s molecular matrix when the liquid crystals are oriented or aligned in a certain manner, a process which is controlled by the LCD cell’s electrodes and their electric currents.

TN panels offer the cheapest method of crystal alignment. They also are the most common of the alignment methods and have been used for quite a long time in the display industry, including in cathode ray tubes (CRTs) that preceded the LCD.

In TN displays, the electrodes are positioned on either side of the liquid crystal layer. When a current is sent between the back and front electrode, something called an electric field is created that shifts and manipulates the orientation of the molecular matrix. 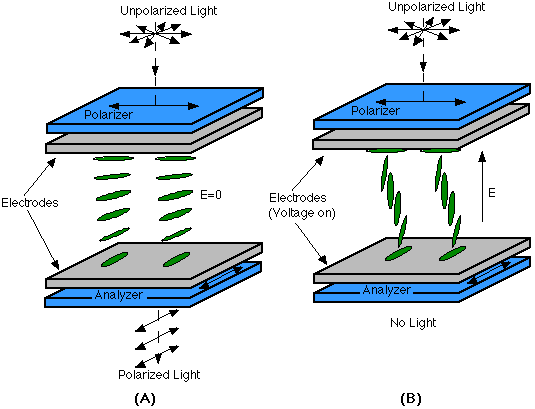 If no electric field is applied to the specific cell, the crystals experience a 90 degree twist in the alignment. As light from the backlight passes through this twist, the light waves are polarized, allowing them to pass through the polarizer that sits on the surface of the TN monitor.

If an electric field is applied, it can either untwist the TN liquid crystal layer partially or in full, depending on the strength of the field. The structure of TN crystals will typically straighten out when this happens, and some, if not all, light waves will not be polarized properly to pass through to the surface.

Each LCD cell composes a pixel of the display, and in each pixel are subpixels. These subpixels use standard red green blue (sRGB) colors to create a variety of colors to make the pixel display the necessary color to play its role in the overall display. If beneath the subpixel the liquid crystal fully polarizes the light, that subpixel’s specific color would be very bright in the pixel as a whole. But if the light is not polarized at all, then that color will not show up. If partially polarized, only a limited amount of that color is used in the mixture of RGB colors in the final pixel. 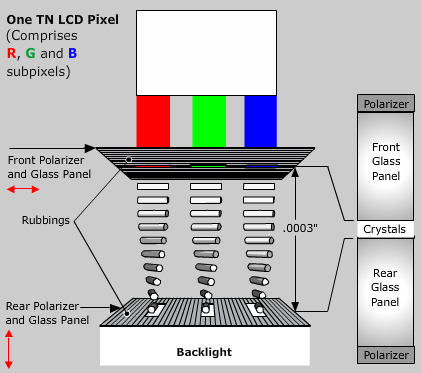 A more complex method of alignment is IPS. IPS monitors, unlike the TN, place both electrodes on the same level, behind the liquid crystal layer. When the electric field is applied, this forces the liquid crystal molecules to align themselves parallel to the IPS device layers instead of perpendicularly like the TN molecules. 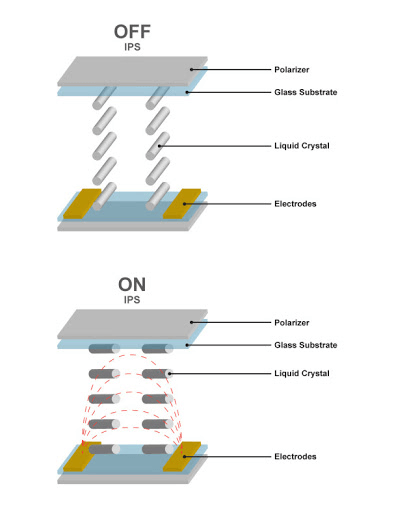 Difference Between TN and IPS

Though both concepts are rather simple to understand, the pros and cons of each are more specific and can attract different consumers in their search for the best monitor to suit their needs and fit their budget.

An important consideration is viewing angles. The TN offers only a limited viewing angle, especially limited from vertical angle shifts, and so color reproduction at these angles will likely not look the same as from a straight-on viewing; the TN’s colors may invert at extreme angles. The IPS counters that and allows for greater and better viewing angles that consequently offer better color reproduction at these angles than the TN. There is one issue with extreme viewing angles for IPS devices: IPS glow. This occurs when the backlight shines through the display at very wide angles, but typically is not an issue unless a device is looked at from the side. 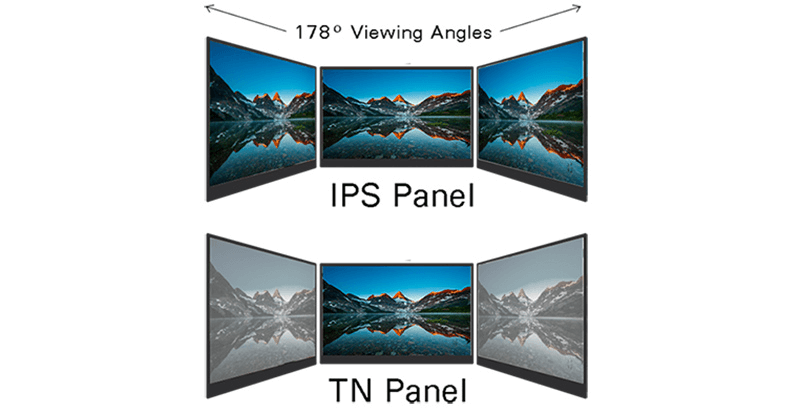 In terms of color, as mentioned, TN devices do not have very strong color reproduction compared to other alignment technologies. Without strong color reproduction, color banding can become visible, contrast ratio can suffer, and accurate colors may not be produced. Color gamut, or the range of colors that the device can reproduce and display, is another feature that most TN displays do not excel in. This means that the full sRGB spectrum is not accessible. IPS devices, on the other hand, have good quality black color reproductions, allowing the device to achieve a deeper, richer display, but it is still not the best option if a customer is in search of high contrast (discussed further in a couple more paragraphs).

While TNs may not have the best color quality, they allow for high refresh rates (how often a new image is updated per second), often around 240 Hz. They also have the lowest input lag (receiving of signals from external controllers) at about one millisecond. TN panels often attract gamers because of the need for minimal lag and fast refresh rates in a competitive or time-sensitive setting. In consideration of moving displays like in video game displays, it is also important for fast response times (how fast a pixel can change from one amount of lighting to another). The lower the response time (the higher the response rate), the less motion blur will be shown as the display changes to show motion. TNs also offer these low response times, but it is important to remember that a powerful graphics processing unit, commonly called a GPU, is still needed to push these displays to meet the fastest refresh and response rates.

Standard IPS devices have been known to have slower response time and refresh rates. This can often lead to not just motion blur but ghosting as well, meaning that an image does not refresh fast enough, and so the previous image will remain temporarily burned in the expected new image. In recent years, though, IPS technology has achieved higher refresh rates than in the past through the super-IPS, abbreviated s-IPS.

Oftentimes, refresh rates and frame rate of output devices (such as graphics cards) will not be synchronized, causing screen tearing when two different display images will be shown at once. This problem can be addressed through syncing technologies like Vsynch, Nvidia’s G-Sync, or FreeSync (a royalty-free adaptive synchronization technology developed by AMD). 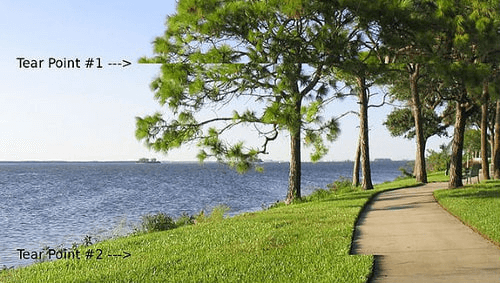 Another common consideration of customers is the price of each display. TN, though it does not offer as high quality of a display, offers the lowest cost and best moving displays, making it useful if the intended use of the LCD monitor is simple and not too demanding. However, if you intend for something that calls for better color production or viewing angles, the IPS and other methods are viable choices, but at much higher costs. Even though IPS motion displays have reached the speed and rates of TNs, the price for such technology is much more expensive than the TN option.

There are other options besides the TN and IPS. One option is known as vertical alignment (VA) and it allows for the best color accuracy and color gamut. Compared to a typical IPS contrast ratio of 1000:1, VA panels can often have ratios of 3000:1 or even 6000:1. Besides improved contrast ratio, the VA is in between the TN and IPS. To compare the TN vs IPS vs VA, the VA does not have as great a viewing angle as IPS but not as poor as the TN. Its response times are slower than TN but faster than IPS (though at fast refresh rates, the VA displays often suffer from ghosting and motion blur). Due to the contrast ratio benefits, VA technologies are most often desirable for TVs.

And lastly, there is an option quite similar to IPS that is called plane to line switching (PLS). It is only produced by Samsung, who claims the PLS offers better brightness and contrast ratios than the IPS, uses less energy, and is cheaper to manufacture (but because it is only created by Samsung, it is hard to judge pricing). It also has potential in creating flexible displays.