If you are at all familiar with displays, from laptop computers to digital watches, you have most likely come into contact with the LCD, short for liquid crystal display. LCD screens and LCD technologies have risen in prominence over the past few decades, especially overtaking the previously popular cathode ray tube (CRT), as the intricacies beneath the surface of the display have advanced in quality and efficiency.

What are Liquid Crystals? 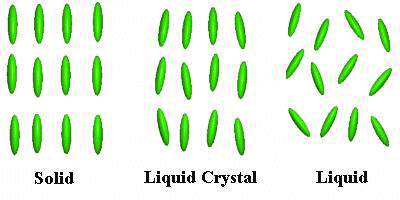 LCD panels can be categorized as flat-panel displays. What makes them distinct from other display technologies is the layer of liquid crystal material within. In this thin layer, liquid crystal molecules are aligned between two glass substrates. On the inner surfaces of each of those substrates lie electrodes that control charge carriers like electrons that then interact with the liquid crystals, creating an electric field that runs through them; this, in turn, can change the alignment of the crystals, also changing the overall behavior of the molecules. On the opposite sides of the substrate, polarizers are used to control the levels of light passage, affecting the overall image of the display.

How Do Liquid Crystal Displays Work?

Unlike CRT monitors, LCD monitors cannot illuminate themselves, and so they require a light source: the backlight. This backlight is most frequently made of the well-known LEDs which stand for light-emitting diodes. Sourced from the backlight, light is moved through the back polarizer and back substrate, into the liquid crystals. Now, the light waves can behave in a variety of ways. Backlight used in LCD displays can be LED (Light Emitting Diode) backlight or CCFL (Cold Cathode Fluorescent Lamp) backlight. LED backlights use less power which becomes more popular, while CCFL is lower cost for large size LCD displays such as large LCD TV. Recently, quantum dots technology is used to increase the LCD contrast.

Electrodes are the controlling factors of the liquid crystal behavior, and thus also the light behavior. By conducting or not conducting a current into the crystal layer, the light may or may not be able to pass through the liquid crystals in a manner that will allow passage through the polarizer. Because of this role, electrodes in LCDs are often made of indium tin oxide (ITO). ITO has good conducting properties and can also make for a transparent electrode which is essential to the appearance of displays today.

How the electrodes affect the liquid crystal alignment can vary depending on the method of alignment used (twisted nematic, multi-domain, in-plane switching). For example, twisted nematic liquid crystals are oriented in a twist when no electric field is present which then polarizes the light passing through the layer; when the electrodes apply the field in full, the twist will straighten out, no longer polarizing the light, and so no light passes. In each of these alignment types, the electrodes are placed differently within the structure, altering the properties of the display, such as width of viewing angle, power consumption, and response time. Despite these different alignment methods, the liquid crystal layer’s purpose remains the same: to polarize the light so that the polarized light passes through to the surface of the display. By polarizing the light transmitted from the backlight, the liquid crystal molecules play a role in how much of the light passes through the polarizing filters, whether it be all, none, or a partial amount. 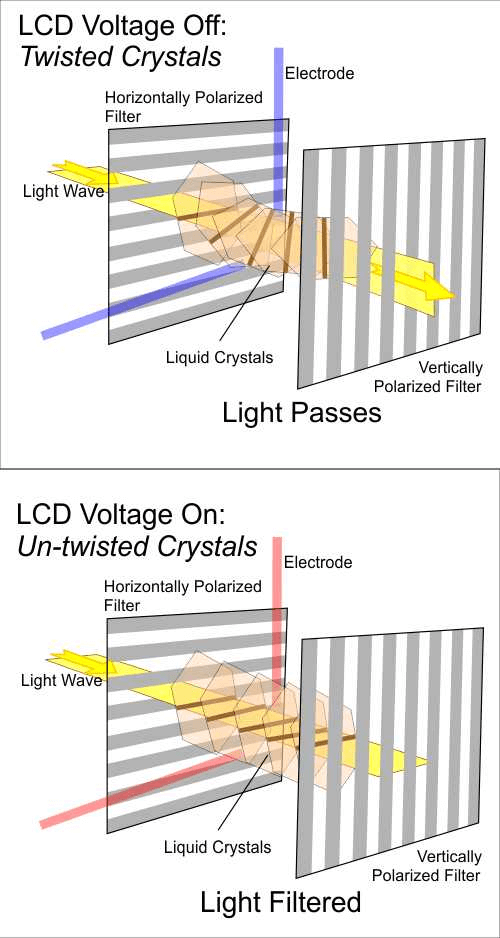 For color displays, there is an additional step between the polarization and interaction with the polarizer. After polarization in the crystal layer, the light passes through an RGB (red green blue) color filter. LCD displays work by using individual pixels to display visuals, moving or stationary. Each pixel will display a color mixed by the RGB color filter with each color’s filter associated with one of the pixel’s sub-pixels. The sub-pixels are where the degree of light is determined, thus affecting the degree of prominence of its respective color. With the groups of sub-pixels combined under a pixel, the RGB colors will mix in a certain way to create a pixel color that will then work with other pixels to finally create the image seen on the display device. 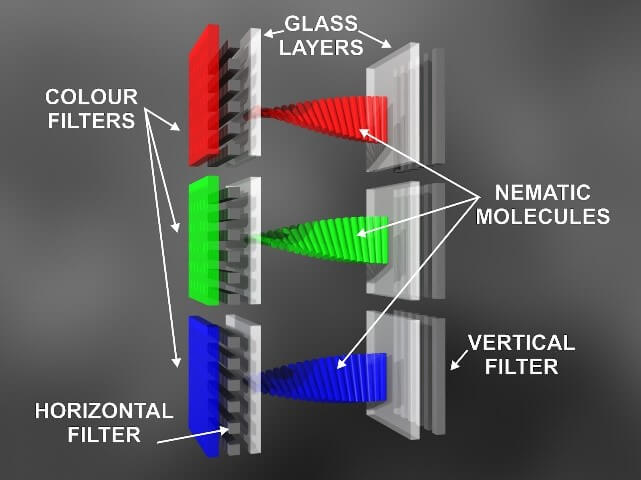 Unlike CRT, the burn-in of LCD displays is recoverable.

How is an LCD Screen Made?

To construct an LCD, the two glass substrates are prepared. On one substrate, ITO is typically deposited to form a transparent yet conductive layer (the electrode layer). Silicon is next deposited on top of the ITO layer along with the transistor parts. On the other layer, the color filter is made using RGB colored dots. Liquid crystal is then dropped in small amounts into the transistor cells made from the first sheet, and it is used as a glue as the two glass substrates are put together, exactly aligning the transistor cells with the color filters. Lastly, the polarizer film is added onto both layers 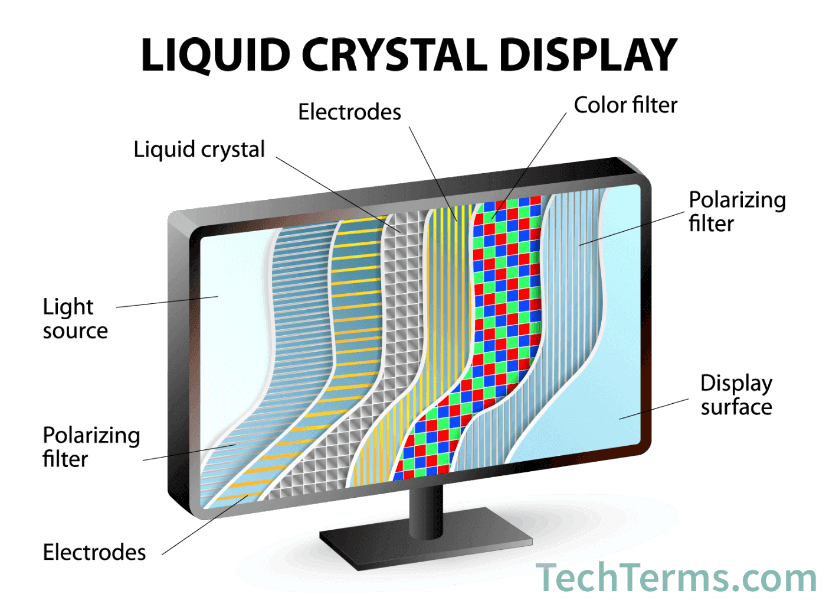 What are the Types and Uses of LCD?

Since the development of the first LCD, matrix technologies that organize the communication between the pixels and the general signal to the display have evolved to allow for higher resolution, faster, and sharper displays. Before the development of the active matrix, the passive matrix was used. The passive matrix LCDs did not use active driving circuitry to maintain the pixels’ information, and when an image was to be refreshed, only then was a signal sent. This resulted in slow and smudged displays when the shown images changed or were moving. However, the entrance of active matrix displays revolutionized the display industry. Moving images were now much more clear and could respond faster to changing images, allowing for better quality displays. Due to the active and independent maintenance of driving circuitry within each pixel, active matrix LCDs (AMLCD) proved extremely appealing to consumers, and so they became the dominant technology for high resolution screens like computer monitors, TVs, and smartphones.

AMLCDs are most frequently constructed with thin film transistors (TFTs). The transistors in a TFT LCD enable the active maintenance of the signal within a pixel without interference with neighboring pixels, making them an essential part of most AMLCDs. Each pixel is a small capacitor with a layer of insulating liquid crystal sandwiched between transparent conductive ITO layers. 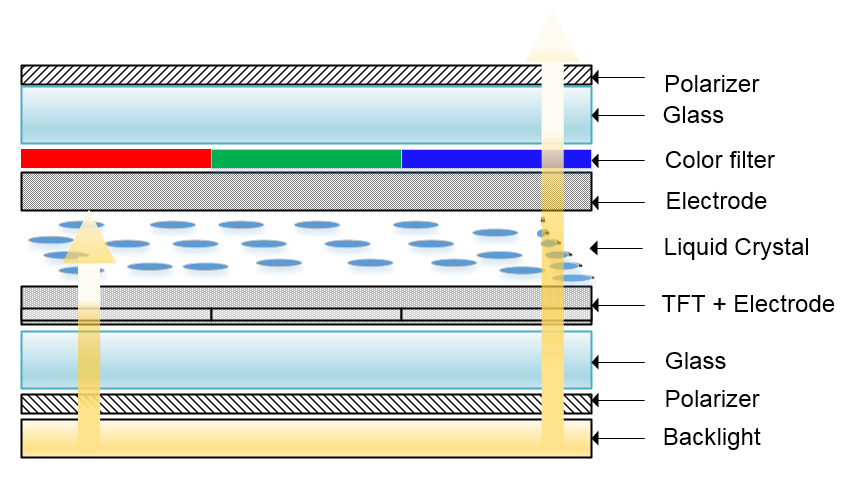 As mentioned earlier, there are various ways of aligning the liquid crystal layer, and each of these techniques creates a different kind of LCD. For example, the TN LCD, being one of the cheaper but also faster options, has become very useful in gaming displays where there is a demand for fast graphic refresh rates and response times.

As mentioned earlier, LCDs rely on a backlight to illuminate the display and its pixels. This has been the case since the first created LCD in the 1960s. For decades after, displays were rather limited in size and resolution. Colors were not as dynamic.

In the 1980s, larger-scale displays were made, such as the first 14 inch full-color TFT LCD. Since then, technology has continued to rapidly grow into what we see today, with the variety of improving smartphones and TV screens.

In recent years, the organic LED (OLED) has grown significantly in its display nature and potential. OLED displays have advantages that the LCDs do not. Using either small molecules or polymers, the OLED does not need a backlight; rather, each pixel has its own organic light producing abilities. This not only reduces the thickness of the OLED when compared to the LCD, but it also allows for deeper blacks and higher contrast ratios. Structurally, besides the backlight, however, the two displays are similar, as they both can use either passive or active matrixes, both often include TFT layers, and both can be made transparent. The OLED has another advantage over the LCD when it comes to structure; without the backlight, it can be made flexible, allowing for newer, more advanced displays like in foldable smartphones.