What is an LCD (Liquid Crystal Display)

Stands for “Liquid Crystal Display.” LCD is a flat panel display technology commonly used in TVs and computer monitors. It is also used in screens for mobile devices, such as laptops, tablets, and smartphones.

LCD displays don’t just look different from bulky CRT (Cathode Ray Tube) monitors, the way they operate is significantly different as well. Instead of firing electrons at a glass screen, an LCD has a backlight that provides light source to individual pixels arranged in a rectangular grid. Each pixel has a RGB (Red, Green, and Blue) sub-pixel that can be turned on or off. When all of a pixel’s sub-pixels are turned off, it appears black.

When all the sub-pixels are turned on 100%, it appears white. By adjusting the individual levels of red, green, and blue light, millions of color combinations are obtained.

How LCDs are Constructed?

An LCD screen includes a thin layer of liquid crystal material sandwiched between two electrodes on glass substrates, with two polarizers on each side. A polarizer is an optical filter that lets light waves of a specific polarization pass through while blocking light waves of other polarizations. The electrodes need to be transparent, so the most popular material is ITO (Indium Tin Oxide).

As LCD can’t emit light itself, normally a backlight is placed behind an LCD screen in order to be seen during the dark environment. The light sources for backlight can be LED (Light Emitting Diode) or CCFL (Cold Cathode Fluorescent Lamps). The LED backlight is most popular.  Of course, if you like to have a color display, a layer of color filter can be made into an LCD cell. The color filter consists of RGB color. You can also add a touch panel in front of an LCD.

The first LCD panel technology in mass production is called TN (Twisted Nematic). The principle behind the LCDs is that when an electrical field is not applied to the liquid crystal molecules, the molecules twist 90 degrees in the LCD cell. When the light either from ambient light or from the backlight passes through the first polarizer, the light is polarized and twisted with the liquid crystal molecular layer. When it reaches the second polarizer, it is blocked. The viewer sees the display is black.

Because LCD technology uses electric fields instead of electric current (electron passes through), it has low power consumption.

A short Youtube video will explain how LCDs concisely and efficiently. 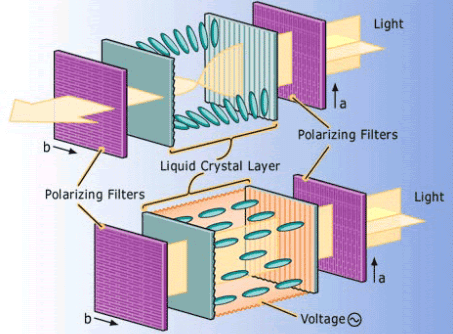 The Basics of LCD Displays

The most basic LCD introduced above is called passive matrix LCDs which can be found mostly in low end or simple applications like, calculators, utility meters, early time digital watches, alarm clocks etc.  Passive matrix LCDs have a lot of limitations, like the narrow viewing angle, slow response speed, dim, but it is great for power consumption.

IPS LCDs are widely used in LCD monitors, LCD TVs, Iphone, pads etc. Samsung even revolutionized the LED backlighting to be QLED (quantum dot) to switch off LEDs wherever light is not needed to produce deeper blacks. 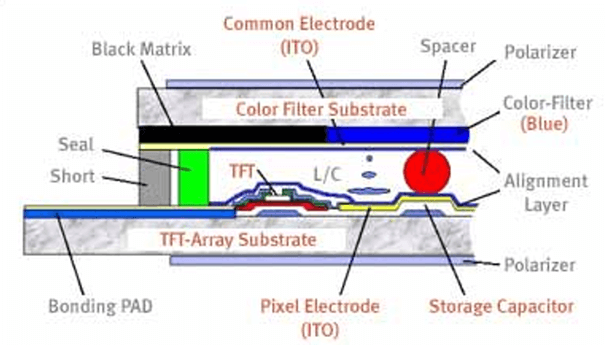 Benefits over other displays

LCD technologies have great advantages of light, thin, low power consumption which made wall TVs, laptops, smartphones, pad possible. On its way to progress, it wiped out the competition of many display technologies. We don’t see CRT monitors on our desks and plasma displays TV at our home anymore. LCD Technologies dominant the display market now. But any technology has the limitations.