AMOLED vs IPS TFT Display: Which is Better Display Technology?

Display technologies are always in progress. Looking back 20 years ago, you might still use bulky CRT (Cathode Ray Tube). You might have a Nokia phone with monochrome STN (Super Twisted Nematic) LCD (Liquid Crystal Display), Your TV at home might be either CRT TV or Plasma TV.  Even with 10 years ago, your mobile phones might use a normal TN TFT (Twisted Nematic Thin Film Transistor) LCD technology with poor viewing angle and contrast. Recent years, companies invested billions of dollars to develop and manufacture better display technologies to give people better contrast, speed, color, power etc. The battle ground in the most elite display technologies is most at the cell phone and TV market which the people are willing to pay more for their daily usage.  AMOLED and IPS TFT are the mainly two rivals in the market. We will present you the two display technologies as below.

Steven Van Slyke and Ching Wan Tang pioneered the organic OLED at Eastman Kodak in 1979. The first OLED product was a display for a car stereo, commercialized by Pioneer in 1997. Kodak’s EasyShare LS633 digital camera, introduced in 2003, was the first consumer electronic product incorporating a full-color OLED display. The first television featuring an OLED display, produced by Sony, entered the market in 2008. Today, Samsung uses OLEDs in all of its smartphones, and LG manufactures large OLED screens for premium TVs. Other companies currently incorporating OLED technology include Apple, Google, Facebook, Motorola, Sony, HP, Panasonic, Konica, Lenovo, Huawei, BOE, Philips and Osram. The OLED display market is expected to grow to $57 billion in 2026.

AMOLED (Active Matrix Organic Light Emitting Diode) is a type of OLED display device technology. OLED is a type of display technology in which organic material compounds form the electroluminescent material, and active matrix is the technology behind the addressing of individual pixels.

An AMOLED display consists of an active matrix of OLED pixels generating light (luminescence) upon electrical activation that have been deposited or integrated onto a thin-film transistor (TFT) array, which functions as a series of switches to control the current flowing to each individual pixel.

Typically, this continuous current flow is controlled by at least two TFTs at each pixel (to trigger the luminescence), with one TFT to start and stop the charging of a storage capacitor and the second to provide a voltage source at the level needed to create a constant current to the pixel, thereby eliminating the need for the very high currents required for PMOLED (Passive Matrix OLED).

TFT backplane technology is crucial in the fabrication of AMOLED displays. In AMOLEDs, the two primary TFT backplane technologies, polycrystalline silicon (poly-Si) and amorphous silicon (a-Si), are currently used offering the potential for directly fabricating the active-matrix backplanes at low temperatures (below 150 °C) onto flexible plastic substrates for producing flexible AMOLED displays. Brightness of AMOLED is determined by the strength of the electron current. The colors are controlled by the red, green and blue light emitting diodes.  It is easier to understand by thinking of each pixel is independently colored, mini-LED.

What are the benefits and negatives of an AMOLED display?

Benefits of an AMOLED:

-No backlight means no background light which can provides bright, vibrant colors to human eye.

-No backlight which means background can be deep blacks and high contrast.

-AMOLED doesn’t like LCD having response issue. It doesn’t have the image delay and has very fast response time.

Negatives of using an AMOLED:

-AMOLED is more expensive to produce than TFT, the cost is high so it can only be used for high end products.

-AMOLED has shorter lifespan than TFT and also have burn-in issue.

-AMOLED uses color mixing to get white color which can look yellowish.

-AMOLED panels are affected by the presence of water.

-AMOLED needs to be driven hard to get higher brightness. Outdoor sunlight OLED is not easily available.

Surprisingly, IPS (In Plane Switching) TFT Display was invented much later than AMOLED. IPS TFT LCD was developed by Hitachi in Japan in the mid-1990s.

IPS technology is like an improvement on the traditional TFT LCD display module in the sense that it has the same basic structure, but with more enhanced features and more widespread usability compared with the older generation of TN type TFT screen (normally used for low-cost computer monitors). Actually, it is called super TFT.  IPS LCD display consists of the following high-end features. It has much wider viewing angles, more consistent, better color in all viewing directions, it has higher contrast, faster response time. But IPS screens are not perfect as their higher manufacturing cost compared with TN TFT LCD.

TN TFT LCD Display (Thin-Film-Transistor Liquid Crystal Display) technology has a sandwich-like structure with liquid crystal material filled between two glass plates. Two polarizer filters, color filters (RGB, red/green/blue)and two alignment layers determine exactly the amount of light is allowed to pass and which colors are created. Each pixel in an active matrix is paired with a transistor that includes capacitors which gives each sub-pixel the ability to retain its charge, instead of requiring an electrical charge sent each time it needed to be changed.  The TFT layer controls light flow a color filter displays the color and a top layer houses your visible screen.

Utilizing an electrical charge that causes the liquid crystal material to change their molecular structure allowing various wavelengths of backlight to “pass-through”. The active matrix of the TFT display is in constant flux and changes or refreshes rapidly depending upon the incoming signal from the control device. 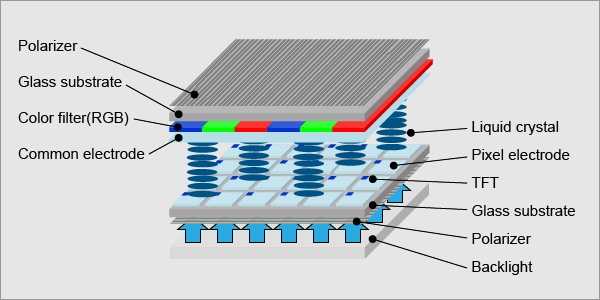 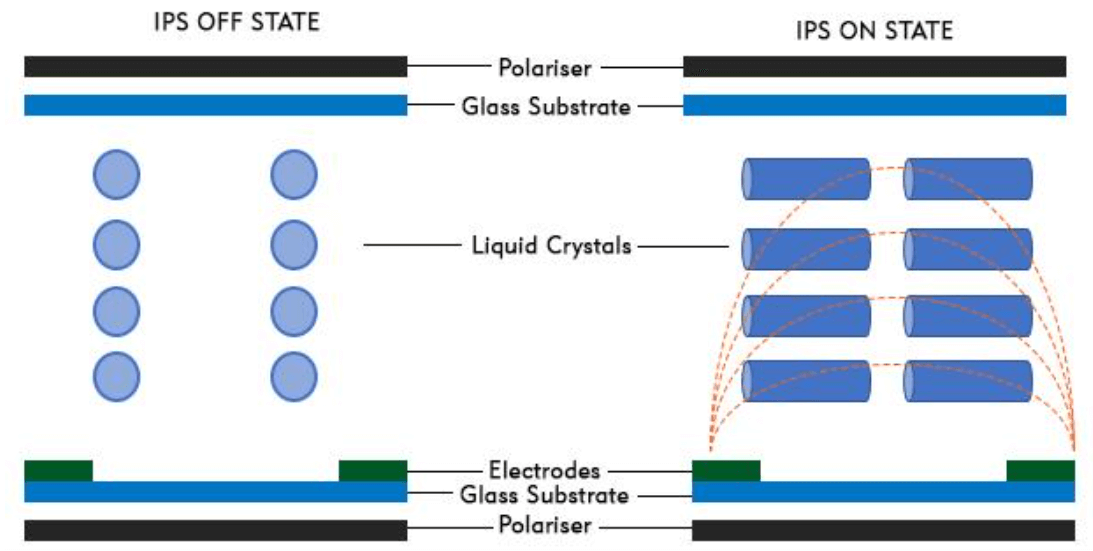 What are the benefits and negatives of an IPS TFT display?

Benefits of an IPS TFT display:

-Many manufacturers can produce IPS LCD screens which means a wide range of standard sizes available in the market and customization is also lower cost than AMOLED.

-IPS TFT display uses backlight which can have the flexibility to use high efficiency LED lamp and can easily get sunlight readable display.

Negatives of an IPS TFT display:

TFT vs. AMOLED: summary of positives and negatives

AMOLEDs and IPS LCDs have its own advantages and disadvantages. Choosing one display technology over the other should purely be a matter of personal preference.

Apple began with the iPhone X is switching to AMOLED displays. Samsung is the biggest AMOLED manufacturer in the world. Of course, Samsung is also the biggest user and advocate to use AMOLED in all Samsung Galaxy note, Android phones and watch series. Samsung even developed  S-AMOLED( Super AMOLED displays) which are AMOLED display that have integrated touch function: Instead of having a layer capacitive touchscreen that recognizes touch on the top of the screen, the layer is integrated into the screen itself. Of course, it adds to the premium cost.

We predict that AMOLED and IPS LCD will co-exist in our market for a long time which makes the world more colorful and beautiful.