Which is Better: Resistive or Capacitive Touch Screen?

Projected Capacitive Touch Panel (PCAP) was actually invented 10 years earlier than the first resistive touchscreen.  But it was no popular until Apple first used it in iPhone in 2007. After that, PCAP dominates the touch market, such as mobile phones, IT, automotive, home appliances, industrial, IoT, military, aviation, ATMs, kiosks, Android cell phones etc.

Projected capacitive touchscreen contains X and Y electrodes with insulation layer between them.  The transparent electrodes are normally made into diamond pattern with ITO and with metal bridge. 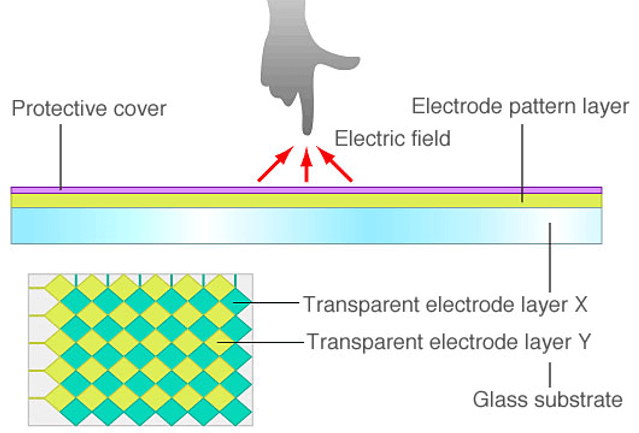 In There are many advantages for P-CAP:

Before 2007, resistive technology was the most popular touch panel market.  From its name, we know that the technology relies on resistance. A resistive touch screen is made of a glass substrate as the bottom layer and a film substrate (normally, clear poly-carbonate or PET) as the top layer, each coated with a transparent conductive layer (ITO: Indium Tin Oxide), separated by spacer dots to make a small air gap.  The two conducting layers of material (ITO) face each other. When a user touches the part of the screen with finger or a stylus, the conductive ITO thin layers contacted. It changes the resistance. The RTP controller detects the change and calculate the touch position. The point of contact is detected by this change in voltage. 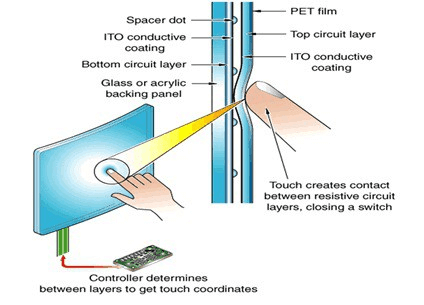 With the fast development of projected capacitive, resistive touchscreen devices market is shrinking rapidly but it is still widely used in some industrial applications because of the following advantages.

The following table shows the comparison of resistive and capacitive touch screens. It is up to your application to select the types of technology to use.

For more information about touch panel, please visit other part of knowledge on our website.