5S is a system for organizing spaces so work can be performed efficiently, effectively, and safely. This system focuses on putting everything where it belongs and keeping the workplace clean, which makes it easier for people to do their jobs without wasting time or risking injury.

There are five key practices involved in 5S. They are as follows:

Each S represents one part of a five-step process that can improve the overall function of a business. 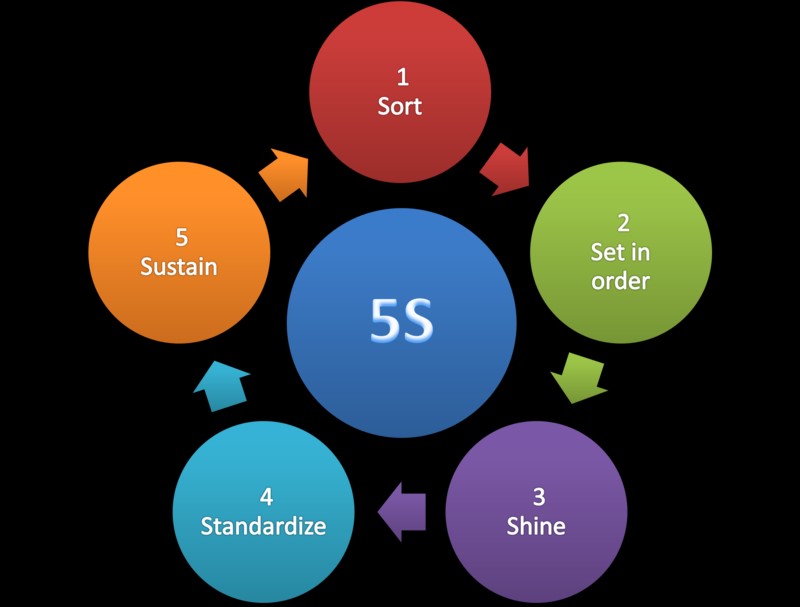 5S began as part of the Toyota Production System (TPS), the manufacturing method begun at the Toyota Motor Company in the early and mid-20th century. This system, often referred to as Lean manufacturing in the West, aims to increase the value of products or services for customers. This is often accomplished by finding and eliminating waste from production processes.

Lean manufacturing involves the use of many tools such as 5S, kaizen, kanban, jidoka, heijunka, and poka-yoke. 5S is considered a foundational part of the Toyota Production System because until the workplace is in a clean, organized state, achieving consistently good results is difficult. A messy, cluttered space can lead to mistakes, slowdowns in production, and even accidents, all of which interrupt operations and negatively impact a company.

By having a systematically organized facility, a company increases the likelihood that production will occur exactly as it should.

The 5S concept might sound a little abstract at this point, but in reality, it’s a very practical, hands-on tool that everyone in the workplace can be a part of.

Let’s take a closer look at each of the parts of 5S.

The first step of 5S, Sort, involves going through all the tools, furniture, materials, equipment, etc. in a work area to determine what needs to be present and what can be removed. Some questions to ask during this phase include:

What is the purpose of this item?

When was this item last used?

How frequently is it used?

Does it really need to be here?

These questions help determine the value of each item. A workspace might be better off without unnecessary items or items used infrequently. These things can get in the way or take up space.

Keep in mind the best people to assess the items in a space are the people who work in that space. They are the ones who can answer the above questions.

When a group has determined that some items aren’t necessary, consider the following options:

Give the items to a different department

Once the extra clutter is gone, it’s easier to see what’s what. Now work groups can come up with their own strategies for sorting through the remaining items. Things to consider:

Which people (or workstations) use which items?

When are items used?

Which items are used most frequently?

Should items be grouped by type?

Where would it be most logical to place items?

Would some placements be more ergonomic for workers than others?

Would some placements cut down on unnecessary motion?

During this phase, everyone should determine what arrangements are most logical. That will require thinking through tasks, the frequency of those tasks, the paths people take through the space, etc.

Businesses may want to stop and think about the relationship between organization and larger Lean efforts. What arrangement will cause the least amount of waste?

In Lean manufacturing, waste can take the form of:

Everyone thinks they know what housekeeping is, but it’s one of the easiest things to overlook, especially when work gets busy. The Shine stage of 5S focuses on cleaning up the work area, which means sweeping, mopping, dusting, wiping down surfaces, putting tools and materials away, etc.

In addition to basic cleaning, Shine also involves performing regular maintenance on equipment and machinery. Planning for maintenance ahead of time means businesses can catch problems and prevent breakdowns. That means less wasted time and no loss of profits related to work stoppages.

Shining the workplace might not sound exciting, but it’s important. And it shouldn’t just be left up to the janitorial staff. In 5S, everyone takes responsibility for cleaning up their workspace, ideally on a daily basis. Doing so makes people take ownership of the space, which in the long run means people will be more invested in their work and in the company.

Once the first three steps of 5S are completed, things should look pretty good. All the extra stuff is gone, everything is organized, spaces are cleaned, and equipment is in good working order.

The problem is, when 5S is new at a company, it’s easy to clean and get organized…and then slowly let things slide back to the way they were. Standardize makes 5S different from the typical spring-cleaning project. Standardize systematizes everything that just happened and turns one-time efforts into habits. Standardize assigns regular tasks, creates schedules, and posts instructions so these activities become routines. It makes standard operating procedures for 5S so that orderliness doesn’t fall by the wayside.

Depending on the workspace, a daily 5S checklist or a chart might be useful. A posted schedule indicating how frequently certain cleaning tasks must occur and who is responsible for them is another helpful tool.

Initially, people will probably need reminders about 5S. Small amounts of time may need to be set aside daily for 5S tasks. But over time, tasks will become routine and 5S organizing and cleaning will become a part of regular work.

Once standard procedures for 5S are in place, businesses must perform the ongoing work of maintaining those procedures and updating them as necessary. Sustain refers to the process of keeping 5S running smoothly, but also of keeping everyone in the organization involved. Managers need to participate, as do employees out on the manufacturing floor, in the warehouse, or in the office. Sustain is about making 5S a long-term program, not just an event or short-term project. Ideally, 5S becomes a part of an organization’s culture. And when 5S is sustained over time, that’s when businesses will start to notice continuous positive results. 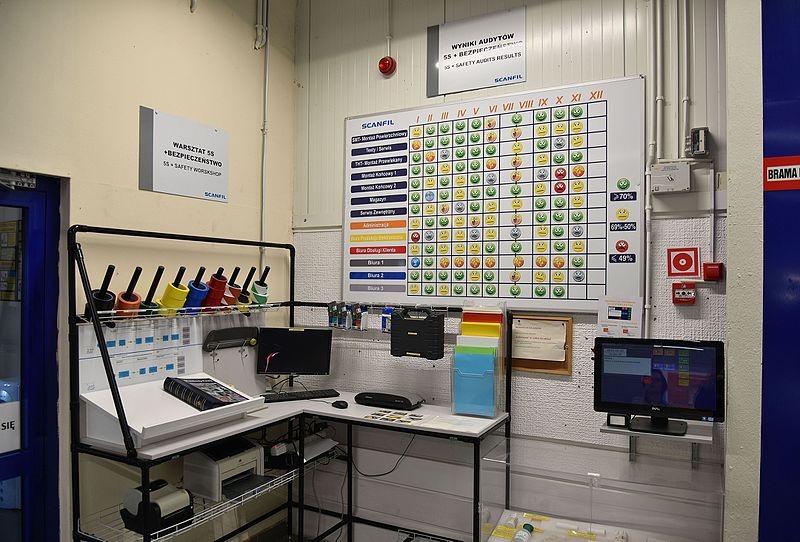 Some companies like to include a sixth S in their 5S program: Safety. When safety is included, the system is often called 6S. The Safety step involves focusing on what can be done to eliminate risks in work processes by arranging things in certain ways.

This might involve setting up workstations so they’re more ergonomic, marking intersections—such as the places where forklifts and pedestrians cross paths—with signs, and labeling the storage cabinet for cleaning chemicals so people are aware of potential hazards. If the layout of the workplace or the tasks people perform are dangerous, those dangers should be reduced as much as possible. That’s what the sixth S focuses on.

Some people consider safety an outcome of performing the other five S’s appropriately, and as a result say a sixth S isn’t necessary. They think if the workspace is properly organized and cleaned and uses helpful visual safety cues, a separate safety step is unnecessary.

Neither approach to safety is right or wrong. But however, a business wants to approach safety, it should be aware that paying attention to safety is important.