Printed Circuit Boards (PCB), are used in almost all kinds of electronic equipment. They are the supporter of electrical connections for electronic components. There are no parts on the standard PCB bare board, which is often called Printed Wiring Board (PWB). The appearance of PCB greatly reduces frequent failures at wire junctions and short circuits when the wire insulation layer begins to age and crack. Typical PCBs are green, but now other colors are also available such as blue, red, etc. PCB can be classified according to the number of layers, frequency, substrate material, etc. The current circuit board is mainly composed of the circuit pattern, substrate, holes/VIAs, solder mask, silkscreen, and surface finish.

Introduction on Printed Circuit Board

A standard Printed Circuit Board

The substrate, which mainly supports and insulates the traces and components, is generally made of dielectric composite materials. The characteristics of the substrate will affect the performance of the PCB, for example, a flexible substrate allows for more design options. Meanwhile, the quality, fabricability in manufacturing and manufacturing cost highly depend on the substrate material. Therefore, choosing the right substrate is the first step toward building a high-quality PCB. FR-4, which is composed of woven fiberglass cloth with an epoxy resin binder, is the most common material of the substrate.

The material of the small circuits that can be seen on the surface of the substrate is copper foil. The initial copper foil layer is laminated to the entire board by heating and adhesive, then part of it is etched away during the manufacturing process, and the remaining part becomes small reticular circuits. The copper thickness varies by weight, and the unit is generally ounces per square foot. In the multi-layer PCB, copper is also deposited on the wall of drilled holes since these holes establish the electrical connection between the layers.

Prepreg is commonly used in a multi-layer PCB. It is a woven-glass fabric reinforced material impregnated with resin. As a sticky material, prepreg can be used to bond different laminates and foils.

A multi-layer Printed Circuit Board

Copper-clad laminate is also called core, which is composed of prepreg and copper foils. In a multi-layer PCB, a certain number of discrete prepregs are bonded together with the outermost copper foils to make a single laminate.

The solder mask layer refers to an insulating protective layer, which is on top of the copper layer. It plays a vital role in preventing the copper wire from being oxidized and short circuits. Additionally, it can also avoid components being soldered to incorrect places. The colors of the solder mask layer are various, such as green, red, brown, etc. The solder mask covers the signal traces but leaves the pads to be soldered.

The Pad of Printed Circuit Board

VIA is a hole used to achieve electrical connection from one layer to another in the multi-layer PCB. There are mainly three types of PCB VIA, namely plated through-hole (PTH), blind VIA, and buried VIA.

PTH is plated through the board and can be seen in double-sided and multi-layer PCB. Although the manufacturing cost of PTH is relatively low, PTH sometimes takes up more PCB space. The copper ring around a PCB plated through hole is called annular ring. It plays a vital role in establishing better connections between VIAs and copper traces in a multi-layer PCB.

Complex PCB such as high-density interconnection (HDI) often require blind and buried VIAs. Blind VIA is an electroplated hole that connects the outermost layer of the PCB with the adjacent inner layers. It increases the space utilization of the PCB circuit layers, but it needs more precise positioning and alignment.

Buried VIA, which is invisible from the outside, only connects between the internal circuit layers. Unlike other VIAs, the drilling of the buried VIA must be completed during the assembly process rather than waiting until the end.

The VIA of Printed Circuit Board

Gold Fingers are metal pads exposed along the edge of a circuit board and are used to establish a connection between two circuit boards. 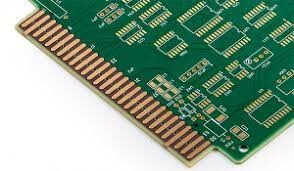 The Finger of Printed Circuit Board