What is OLED display?

OLED is a relatively new type of display for televisions, smartphones, laptops. After only being invented in 1987, OLED is already one of the two top display technologies in the industry. OLED stands for Organic Light Emitting Diode. This display technology uses organic (carbon-containing) compounds that emit light when a current is passed through it. OLED technology is known for its high picture quality along with its premium price point.

OLED’s main competitor is the cheaper liquid crystal display, abbreviated LCD. However, OLED boasts higher color contrast and larger viewing angles which make it ideal for high-end electronics. OLED panels are also lighter and more flexible than LCD displays. They are also long-lasting with a lifespan of around 22 years if used 6 hours a day.

There are many different types of OLED displays. The most common types are Passive-Matrix OLED (PMOLED) and Active-Matrix OLED (AMOLED). The main difference between these two is that the active-matrix OLED has a thin film transistor (TFT) while passive matrix OLEDs do not. Thin film transistors act as semiconductors in OLED displays. AMOLED is best used for large-sized screens because the TFTs make it more energy efficient. Another type of OLED is the phosphorescent OLED or PMOLED. Phosphorescent OLEDs are more efficient than fluorescent OLEDs. The high-efficiency phosphorescent OLEDs lose energy slower by fading gradually instead of disappearing right away. There is also another type of OLED often called PLED that uses light-emitting polymers instead of organic molecules. Most OLEDs have glass substrates, but OLED devices can also be made with plastic substrates ideal for flexible OLEDs because they are thinner.

What does OLED stand for?

OLED stands for Organic Light Emitting Diode. In this case, organic does not refer to food but to its chemistry definition: molecules that consist of chains or rings of carbon along with other elements. The rest of the acronym, LED, stands for Light Emitting Diode. This refers to any system with two electrodes that emits light in the presence of an electrical current. The electrodes are of opposite charges. The positively charged electrode is called the cathode while the negatively charged electrode is the anode. In between the electrodes are the organic layers. Therefore, when the electrons go from the anode to the cathode creating a current, they pass through the organic materials which then emit colored light. OLED displays use yellow and blue organic materials. Other colors are then made using many color filters.

How long OLED has been in the industry?

OLED has been in the industry since 1987. It was invented by chemists Ching Tang and Steven Van Slyke from Kodak. Even though it has been invented for a while, mass production of OLED did not start till recently. Right after it was invented, it encountered a few technical hurdles. It wasn’t till 1996 that the first display was made, and it wasn’t till 2013 that the first commercially available OLED TV came out.

OLED products have better picture quality, contrasts, viewing angles, color accuracy, flexibility, and power-efficiency. Though it has better quality, OLED devices tend to have a more premium price tag. This is why OLED is currently only the main choice for high-end mobile displays and TVs. The one aspect where LCD is better is it has higher maximum luminance making it more optimal for bright spaces or direct sunlight. OLED and LCDs have the same max resolution of 4K. 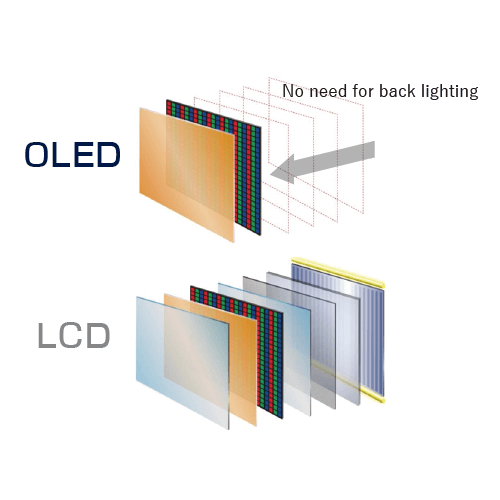 The main benefits of OLED are the color contrast, viewing angles, color accuracy, and energy-efficiency. OLED provides better color contrasts because it can create a pure black unlike LCD displays. Because LCD displays have a backlight, they can never achieve a full-black like an OLED can. OLED only emits light when a current is passed through, so if there is no current, there is absolutely no light. OLED can also change the brightness of a picture pixel by pixel. Because of the limitation of the backlight, LCD displays can at best only dim the screen by small regions. This is because the only way to dim the picture is to reduce the brightness of the backlight, and it is not feasible to have a backlight for every pixel.

OLED also increases the viewing angles of the display. For LCD panels, the best viewing angle is dead center, and the contrast reduces as the angle increases. This is much less dramatic in OLED displays.

One huge benefit to OLED are the flexible displays. The displays do not need to be flat which gives designers more freedom. OLEDs can also be printed onto any substrate (background substance) through inkjet printing. They can be printed on glass as well as plastic, so they can be rolled up. Flexible OLED is also used in foldable phones. This technology is very new. It was just two years ago when the company Royole invented the first foldable phone, and Samsung soon followed with their own one at the beginning of 2019. Other companies like AUO have just started to follow these companies too and make their own foldable phones.

OLED is mainly used in electronics but also has another interesting use: lighting. Philips Lighting makes OLED lighting panels under the brand Lumiblade. Currently, Universal Display Corporation owns most of the patents with regards to OLED technology.

When was OLED invented?

OLED was invented in 1987 by scientists Ching Tang and Steven Van Slyke from the company Eastman Kodak. However, after its production, it still took a long time to be mass-produced. Eastman Kodak went on to produce digital cameras in 2003. In 2004, Sony released the first OLED TV. LG made its first OLED TV in 2010. In 2013, both Sony and Panasonic backed out of the OLED creating market. LG display is now the leader of the OLED market and provides other companies with OLED screens. OLED is currently used in high TVs and mobile phones.

Who invented the OLED screen?

In 1950, French chemist André Bernanost discovered the electroluminescent properties of organic compounds. However, this discovery wasn’t put into use until 1987 when scientists Ching Tang and Steven Van Slyke invented the modern OLED screen. Another decade went by until OLED was used commercially. The company Pioneer started by using it in car displays. A year later, it started to be used in TVs. Finally, in 2000, OLED started being mass-produced by Sanyo Electric, LG, NEC, and Samsung.