The view direction is the right direction marked with Φ which is with respect to the X-axis. The original location is the center point of the display panel surface, the Z axis is Normal, the X-axis is Horizontal and Y-axis is Vertical.

Normally it was defined 4 angles to correspond with 3, 12, 9, and 6 o’clock respectively. So, you can find the 6 o’clock or 12 o’clock parameter in the LCD datasheet. 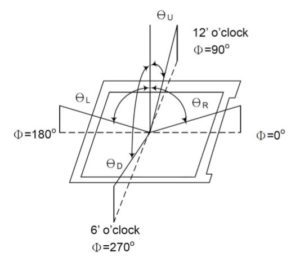 Viewing Angle is the angle with respect to the Z-axis in a certain direction and marked by θ (θU means upper View Angle). LCD Viewing Angle describes the maximum watching angle, and it is one of the key indicators with the display module.

The viewing angle can also be explained using the simple way as below.

The LCD bias angle is the angle perpendicular from which the display is best viewed. (See Fig.2) This angle is determined when the display is designed and can be set at any angle or orientation. The orientation of the bias angle of LCD displays is often stated with reference to a clock face. If the offset is above the display, it is referred to as a 12:00 or Top view. 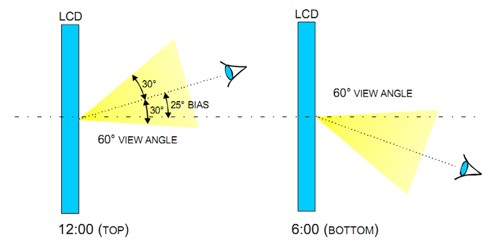 LCD Viewing Direction – How to Set it correctly?

The LCD viewing angle is the angle formed on either side of the bias angle, where the contrast of the display is still considered acceptable. Generally, this contrast is specified as 2:1 for monochrome LCD and 10:1 for color LCD.

A typical STN character display running at a duty cycle of 1/16 has a viewing angle of ±20 degrees and a bias angle of 25 degrees.

Normally, we have the ways below to improve the viewing angle.

How to Improve LCD Viewing Angle?

Generally, displays are optimized for straight-on viewing. Either a 6:00 or 12:00 module may be used, and the contrast voltage can be adjusted slightly to optimize the display for that viewing position. In the above example, the viewing angles of both 6:00 and 12:00 modules actually overlap the perpendicular (or straight on) viewing position.

When the view position is established, the contrast setting can then be determined. This is done during product development on the prototyping units.

Generally, a 10K ohm potentiometer is then connected between VDD and VSS in a single supply module, or from VDD to the negative rail in a dual supply module. The wiper of the pot is connected to the VL input of the module. (See Fig.3)

The LCD is positioned at the nominal viewing position and the pot is adjusted to obtain the desired LCD appearance. The voltage on the VL pin is now measured and a pair of resistors are chosen to produce this voltage in the production units.

Want to find out more about LCD, OLED & TFT solutions? – Check out our knowledge base, where ypu can find tips on electronics operating temperature and differences between LCD and TFT!