How to Improve LCD Response Time

With the recent widely use of PC and online games, and PCs equipped with DVD drives give users more opportunities to see moving images such as those in 3D games or action movies on screen. This increase in motion picture content means computer monitors must be able to display not only still images, but moving ones as well. The customer has more and more fast response time request for LCD display. Unfortunately, slow response time is one of the drawbacks for LCD. With the technology progress, LCD can meet most of the requirements for response time.

If response time is slow, the transition from one picture (or frame) to another can produce an afterimage or blurring effect. This problem occurs not only when looking at motion pictures, but also during scrolling. For this reason, panels with faster response times are typically recommended for displaying moving images.

Listed below are calculations for the liquid crystal response times that the displays meet, with consistent reliability, for various application standards. Response time is measured in milliseconds (ms, 1/100 second). The shorter the time frame, the better the display quality.

Liquid crystals are rarely completely turned on or off. Instead, they cycle in between gray states. The following are two common methods the display industry uses to measure response time: 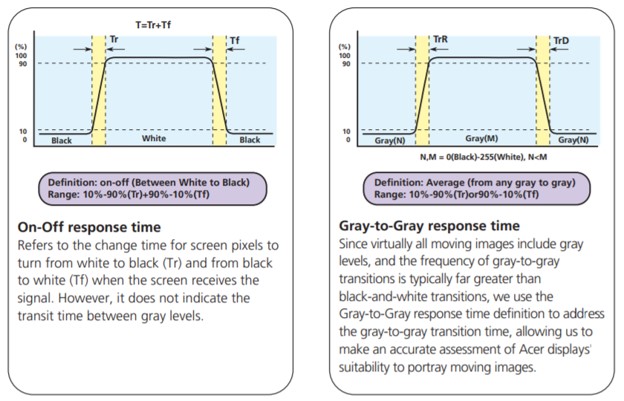 At present, there is no accepted standard for the computation of Gray-to-Gray response time. The above definition is just for reference.

How to improve LCD Response Time?

There are several ways to improve the LCD response time.

Key parameters of faster response time are listed below and the improvement can be done first by optimizing the following parameters.